NO VACANCY FOR DROUGHT AT HOTELS

You are here:
Updates 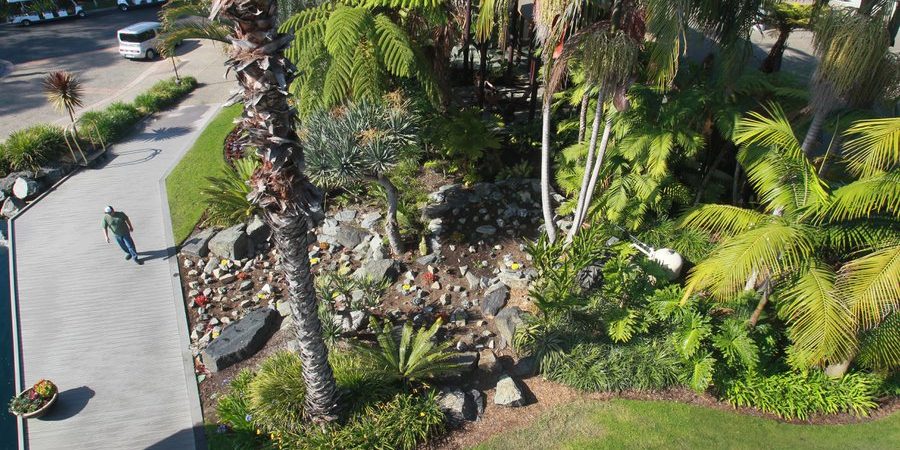 On vacation from her home in Montana, Terra Pierce couldn’t help but be reminded of Southern California’s parched conditions as she admired the papyrus-lined lagoons, stately palms and hibiscus that populate the lush grounds of the Mission Bay resort where she was staying.

“How could they not use the water to keep everything looking like this?” Pierce wondered as her young granddaughter tinkered with a wind chime outside the Paradise Point Resort gift shop. “They’re one of many beautiful resorts in California and, if they don’t water anything, this would all die.”

What Pierce couldn’t have known is that the operator of the 44-acre property last year replaced 10,000 sprinkler heads with low-flow versions and converted roughly 40 percent of the resort’s 10 acres of grass to drought-tolerant landscaping. And just yards away from where she was standing, a crew of workers was using a forklift to unload a new, 59-foot-long “tunnel” washer designed to cut nearly in half the hotel’s water consumption for laundry.

As San Diego County hotels prepare to welcome millions of summer tourists, they’re under growing pressure to significantly conserve water amid local mandates that water districts pare usage by anywhere from 8 percent to 36 percent. During June, July and August alone, the county’s overnight population is expected to swell by nearly 3 million visitors.

• How you can save water

No longer can hotels simply rely on environmentally conscious guests to heed gentle reminders to reuse their bath towels instead of tossing them on the floor. Nor can they necessarily shame visitors into skipping baths and taking five-minute showers.

Instead, lodging properties are having to get more creative — and disciplined — about controlling water usage, whether it’s foregoing hosing off walkways, converting to less thirsty plantings or spending thousands, if not millions, of dollars to install state-of-the-art equipment to monitor and reduce water consumption.

“The hoteliers I’ve talked to are very concerned about it, but I don’t think the hotels are going to be very successful in getting their guests on vacation to take a short shower,” said Carl Winston, who heads San Diego State’s L. Robert Payne School of Hospitality and Tourism. “If I’m paying $200 for a hotel, I want a long shower. But the hoteliers are saying, ‘We’re going to have to let some brown show up in our greenscape.’ ”

“But remember, when you buy a hotel, you buy it online, and the pictures of the hotel are still going to show green. Guests aren’t going to stop showing up because of the landscaping.”

Hotels don’t want to alienate guests
Nationwide, hotels and other lodging businesses account for roughly 15 percent of all water used in commercial and institutional facilities, according to the Environmental Protection Agency, which a year ago launched its Water H20tel challenge to help hospitality businesses ramp up efforts to conserve water.

Closer to home, Mayor Kevin Faulconer assembled two meetings this year with top water users, among them large hotels, to spread the conservation message and encourage them to dig deeper to find ways to curb water use. Both at the state and local levels, there is a recognition of the delicate balancing act hotels face in trying to pare their usage while not alienating guests, who contribute to what is the county’s third-largest economic sector, noted Alejandra Gavaldón, the city’s director of federal government affairs and water policy.

“We are going to continue to see an increase in the number of visitors and hotel nights, which is great for us, but it also creates an additional challenge for hotels if they need to reduce water use,” Gavaldón said. “So the regulations do acknowledge we have certain sectors critical to the economy, and that’s why the state is giving everyone flexibility in how they’re going to impose the (conservation) target.”

Green teams brainstorm conservation
For years, the hotel resorts and casinos that have come to define Las Vegas have, like the rest of the city, recycled all indoor water, which is treated to near drinkable standards and returned to Lake Mead, said Southern Nevada Water Authority spokesman Bronson Mack. And the approval process for new, large resorts requires that they submit a conservation plan detailing how they intend to minimize water use.

Across San Diego County, hotel executives have been assembling “green teams” to brainstorm ideas on how to eliminate water waste. At Paradise Point, where roughly half the landscaped grounds are drought tolerant, that effort began in earnest two years ago, driven partly by a desire to cut rising water bills, said General Manager David Hall.

The first step was to begin a gradual replacement of grassy patches and a tiered waterfall feature with drought-resistant vegetation and a rock garden anchored by dragon trees — despite the initial panicked reaction from the wedding planning team. Next came the installation of a pressure-reducing valve at the juncture of the city’s water main and the resort’s supply line.

“By doing that, every spigot has 25 percent less volume coming in,” Hall said. “If you brush your teeth for 2 minutes, that is a water savings.”

And now the 462-room resort is investing in a new, multimillion-dollar laundry system that can reuse water as multiple loads of towels and bedding move through the gigantic chamber. In replacing its seven 20-year-old washers, the hotel, which processes about 6 million pounds of laundry a year for the resort and a sister property on Mission Bay, expects to save 10 million gallons of water annually. That’s enough water to supply 61 four-person households for a year.

While Paradise Point’s water consumption is down just 1.5 percent so far this year, Hall expects the savings will be closer to 35 percent once all of the initiatives are fully in place.

High-tech laundry
photo
The Hilton San Diego Bayfront uses a high-tech system that reclaims water for washing its 15,000 pounds of laundry daily. — John Gastaldo
The 1,190-room Hilton San Diego Bayfront, one of San Diego’s largest hotels, has been using for more than two years a high-tech laundry system similar to Paradise Point’s that filters and reclaims 70 percent of the water used for cleaning dirty laundry. Since it was installed in late 2012, it has recycled more than 24 million gallons of water that would have otherwise been flushed into the sewer system as the hotel processes 15,000 pounds of laundry per day, said Justin Jolicoeur, the hotel’s vice president of operations.

In an effort to conserve even more, Jolicoeur said he is exploring the possibility of purchasing a $25,000 dry ice system to power wash the hotel exterior without using any water. The Hilton currently uses a company to pressure wash the exterior once a month.

Some hotels have opted to get a quick water-savings fix by simply outsourcing their in-house laundry service to companies that have the kind of expensive equipment to clean sheets and towels more efficiently and with less water. The Manchester Grand Hyatt, San Diego’s largest hotel at 1,625 rooms, began exporting its laundry to a Los Angeles-based company at the end of last year, and most of its 7 percent drop in water usage is because of that change, the hotel said. Earlier this year, the 45-acre Rancho Valencia resort in Rancho Santa Fe also moved its laundry operation off-site.

Harry Kertenian, owner of Magic Laundry Services, which does laundry for a number of San Diego hotels, including the Hyatt, said it is definitely seeing an increase in the number of hotels deciding to sign on with his company, which has the financial wherewithal to invest in costly technology that conserves far more water than conventional washing machines.

photo
Loews Coronado now washes its pool deck with a water-efficient, motorized scrubber instead of using a hose — a 75 percent savings. — John Gastaldo
The Loews Coronado Bay Resort, while it has not made any major changes in its laundry operation, has seen a 6 percent drop in water use per occupied hotel room after spending $54,000 this year to switch out 15 percent of the landscaping to drought-tolerant plants such as pygmy palms and star jasmine, and by installing drip irrigation on parts of the property. It also has stopped the wasteful practice of daily hosing off the resort’s pool deck and last year went with a sort of mini street sweeper that uses far less water.

“The other big area we’ve been working on is talking to our meeting planners about the drought and not automatically presetting water,” said hotel manager Darren Pound. “We’re now putting it on our banquet orders; ‘water on request only.’ Many are saying, ‘You’re absolutely right, I don’t need water for all 200 people for breakfast.’ We’re cutting the number of water pitchers in half.”

Even the 1,065-room Harrahs Resort Southern California in Valley Center, which relies on well water and is not under a formal mandate to cut back, has been undertaking a number of initiatives, including disconnecting some of the resort’s decorative fountains, moving toward a more drought-tolerant landscape and testing an aerator system in its casino-floor public restrooms that would restrict the volume of water coming out of the sink faucets.

Because the resort draws most of its guests from Southern California, property operations manager Brendan O’Kane believes much of its 15 percent water savings through April is owing to the high awareness of its patrons.

Still, hoteliers say they’re wary about being too preachy to their guests. It’s unlikely many properties will be willing to follow the lead of the Kalaloch Lodge in Olympic National Park in Washington, which offered a five-minute shower challenge to its guests as a water-conservation strategy.

Hotel owner Bob Rauch, whose company also manages a number of San Diego properties, believes more direct communication with guests can make a difference. Toward that end, the lead story in his June newsletter that is distributed at the front desk advises them of the “unprecedented drought conditions” facing California and asks them “to be aware of this during your stay here and do what you can to help.”

But just to make sure no offense is taken, he adds the following caveat:

“We also want to ensure that this is not something that impacts your stay in a negative way … so enjoy your time here with us and know that we are here to serve you.”